Last spring, Hormel Foods CEO Jeff Ettinger and his two predecessors, Joel Johnson and Richard Knowlton, sat down for a lunch at the Vintage Club golf course in Palm Springs to share a meal of fried rice with Teriyaki Spam — a recipe that Ettinger had learned from his son’s college roommate.

“This is my eleventh year as CEO,” Ettinger said at the outset. “So now we’ve all had double digit tenures as CEOs, which is pretty rare in modern American business. It’s a wonderful legacy to share.” 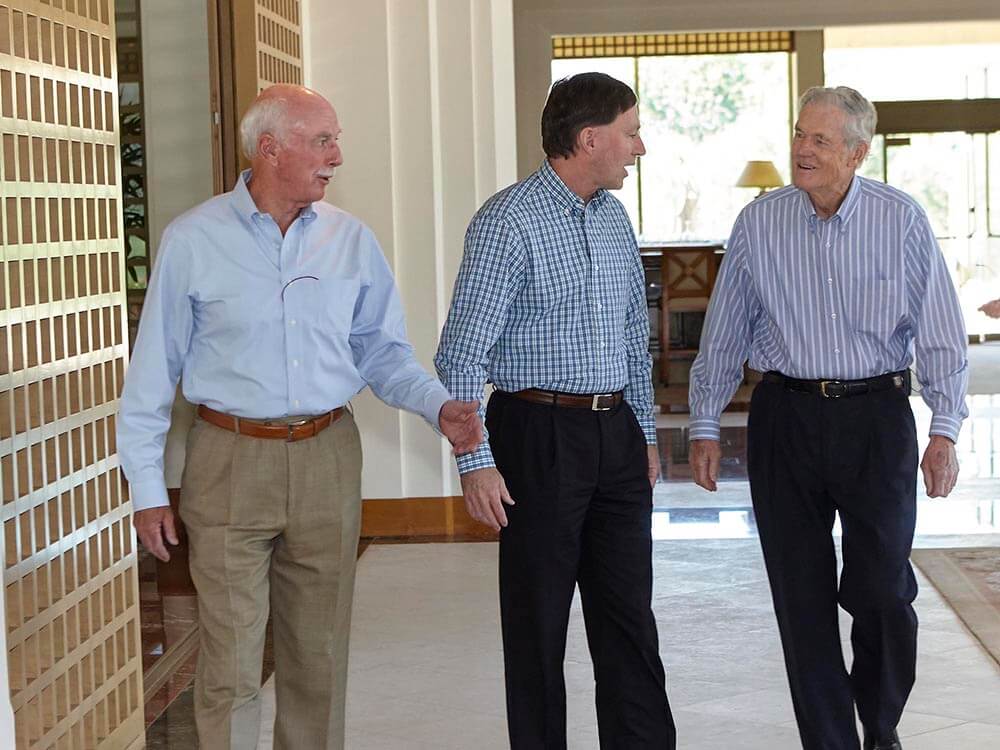 Over the course of the lunch, the three shared stories of old co-workers, adventures they had on their international travels and their individual perspectives on what has kept the company so vibrant for so long.

“I was glad to be part of that era of so many new products.”

One key, Johnson suggested, was that Hormel Foods had always remained on the cutting edge.

“I think the company has always been very contemporary, even back in the day,” he said.  “Think of the Italian products that were introduced back in the teens and twenties — the salamis and the pepperonis. Italian food wasn’t widely popular at that point and we were there to grow that phenomenon. It was similar with the Hispanic food as well. When I was a kid, I couldn’t have told you what a taco was, much less a chimichanga. We’ve kept the portfolio fresh instead of doing the same tired old thing, over and over again.” 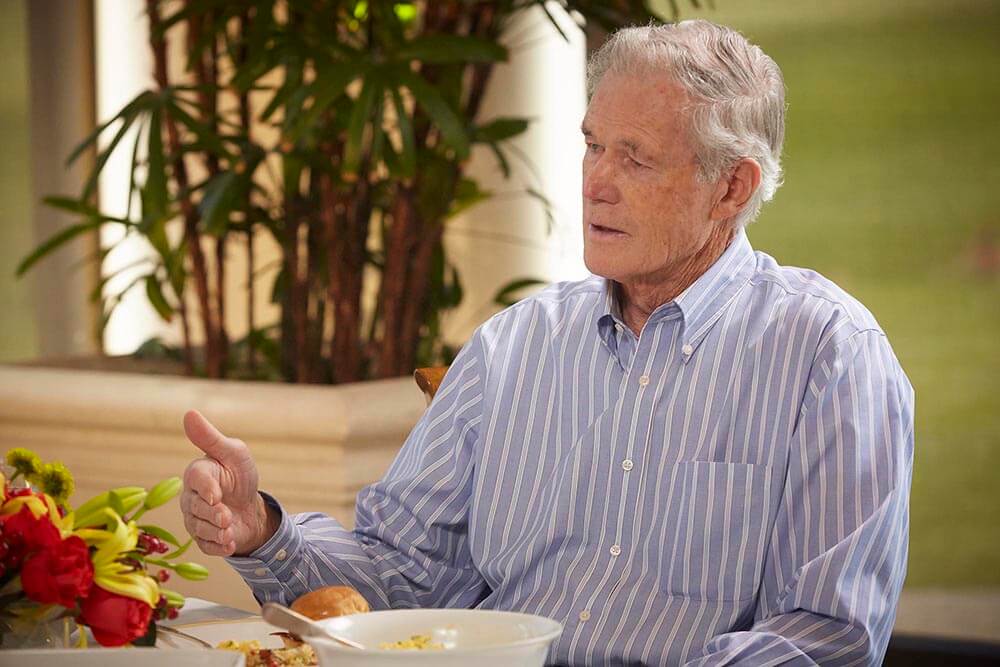 Knowlton, who was CEO from 1981 to 1993 when the company began to invest in Hispanic food products, remembers those new product lines fondly. “That was a fun time,” he said. “I think everyone in the company was excited when we partnered with the CHI-CHI’S® brand. We were convinced that business was going to be one of our strengths. I was glad to be part of that era of so many new products.”

Ettinger adding how important it was to create a balance between Americanized ethnic foods and ones that had an authentic connection to their country of origin. “The Mexican franchise has such a great balance of made-in-America brands like CHI-CHI’S® salsa, which was derived from a Tex-Mex restaurant chain but I think having those authentic items — the Herdez® brand, Bufalo® brand, Embasa® brand and the Dona Maria® brand have also been a boon for us. We really offer the full portfolio now.”

The mention of Herdez got Johnson remembering the day he finalized the partnership with Don Enrique Hernandez-Pons, the head of the company. “We signed the original deal on a paper napkin on a restaurant in Florida.”

“I’d put Hormel people up against anyone in the industry. When Hormel gets behind something, we have the firepower and confidence to deliver.”

The three Hormel CEOs all shared the belief that creating great brands and partnering or purchasing brands with great promise was certainly central to the company’s success. But they also agreed that the company had assets that customers might be less aware of.

“I think our greatest strength is something that that outsiders don’t see,” said Johnson. “It’s the core strength we have in function by function, from R&D to production to cost control. I’d put Hormel people up against anyone in the industry. When Hormel gets behind something, we have the firepower and confidence to deliver.”

Knowlton added that keeping all those parts of the company constantly communicating and understanding the needs of each other was also important. CEO from 1981 to 1995, Knowlton was the senior of the trio and also had the distinction of having the longest history with the company. Besides his two years in the Air Force, he spent his entire working life at Hormel Foods and saw the company through some difficult years that saw rising labor costs and falling red-meat sales. “We kept marketing very close to production,” Knowlton said, “and that is one of the things that allows for cost savings and our ability to identify opportunities and find the product that will fit.”

“That’s right,” Johnson agreed. “The marketing people aren’t sitting in some skyscraper in New York with the plant workers out in the midwest. Our marketers are right across the street from one of our biggest plants.”

All three of the former CEOs agreed that employee loyalty at Hormel Foods creates a spirit of teamwork and company cohesion. “Frankly,” said Ettinger, we’re admired by others in the industry and they’re a little jealous when they see how loyal our employees are how long they stay with the company.”

“I think we’ve also benefited from the foresight that Jay and George Hormel had in creating the foundation.”

Where exactly that spirit of solidarity comes from, was the topic of much of the discussion at the lunch. Johnson suggested that the company’s small town location might select for a certain type of grounded and value-driven person.

“For the most part we grow our own people,” said Johnson. “You know Austin isn’t for everybody. So there is a self-selection that takes place right at the beginning of people’s careers. Once they are five or six years into working here, they realize how good a company Hormel Foods is and we often have them for the rest of their career.” 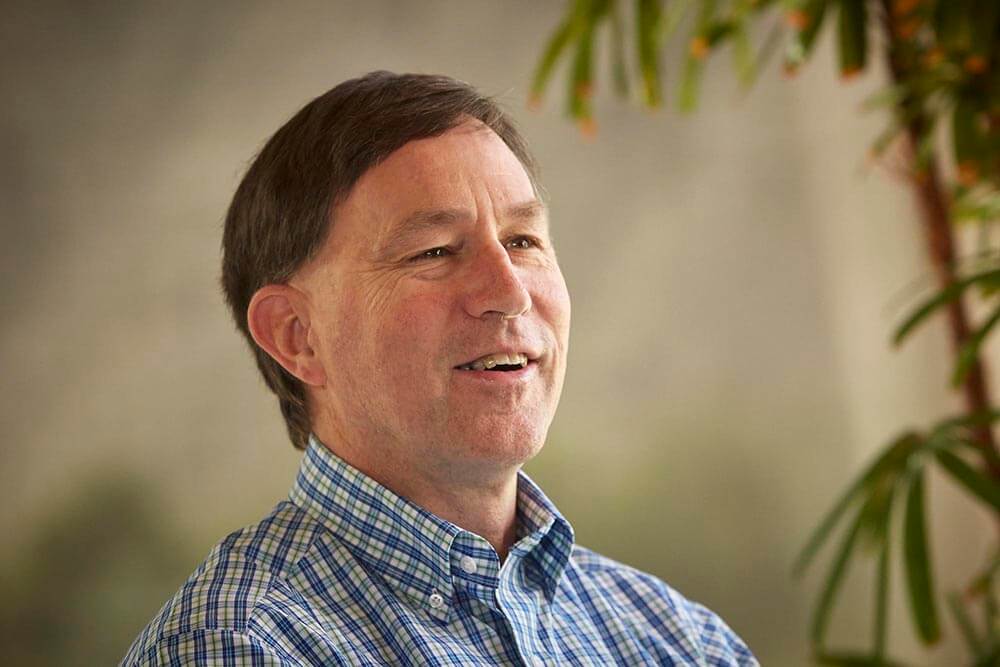 “I think we’ve also benefited from the foresight that Jay and George Hormel had in creating the foundation,” said Ettinger, referring to fact that nearly half of the company’s stock is controlled by the Hormel Foundation. “Especially in this day and age of activist investors and takeover threats, the fact we are protected in that regard allows us to make long-term decisions and gives employees who come to the company some confidence that the company is going to be around if they stick with it.”

Because people tend to have long careers at Hormel Foods their focus tends on the long term. “People are going to get to live their successes,” said Johnson, “and have time to fix their mistakes.”

Together, the three CEOs described a company culture that shares a deep respect for all layers of the business – from production to marketing.

“The marketing people realize that it’s not just marketing sizzle,” said Johnson. “It’s not just a great ad campaign. The product has to satisfy, surprise and delight the consumer. We are still very much in the business of finding wonderful opportunities.”

The Evolution of a Logo