From its original 1991 small storefront opening in the former Oak Park Mall to its thirteen-year home next to corporate office space, the SPAM® Museum has a new permanent home in downtown Austin, Minn. History, pop culture, education and fun all come together in this 14,000-square-foot attraction in southern Minnesota.

Some exhibits were transplanted from the old museum, including a look at the product’s role in supporting the troops during World War II. Others are new, including the international feature that highlights the popularity of the SPAM® brand and products around the world.

The new location in downtown Austin is comprised of multiple galleries.

Many of the exhibits include games, interactive videos and hands-on activities.

Among the exhibits are a few extra eye-catchers, including a 12-foot, 60-pound SPAM® brand-themed rocket and a complete set of bluegrass instruments made from SPAM® cans. The rocket was made by company employee Gerald Meux Jr. and was actually flown before being retired to the museum. The instruments were played across the country at music festivals but now are purely for display. You can, however, purchase a functional SPAM® brand can-jo in the gift shop.

A 390-foot conveyor is suspended from the ceiling and runs through the museum carrying 20 different varieties of SPAM® product. The can train takes approximately 18 minutes to make an entire lap around all parts of the museum.

The exhibits can be explored on your own, or with the help of a SPAMbassador™ ambassador. These guides offer visitors additional facts and information about the exhibits, answer any and all questions that may come up, and also occasionally hand out small bits of SPAM® product on a toothpick or pretzel stick, commonly known as SPAMples.

The museum tells the origin of the SPAM® brand and its place in world culture, the history of the Hormel Foods company and the story of a small Minnesotan town built by a family and a dream.

The SPAM® brand has become so iconic that it needed its own museum. Marketing director Nicole Behne said, “Of course we have a museum! We are the meat that can do what other meats cannot. We have had a place in history, pop culture and culinary cuisine for almost 80 years – why wouldn’t we have a museum?!” 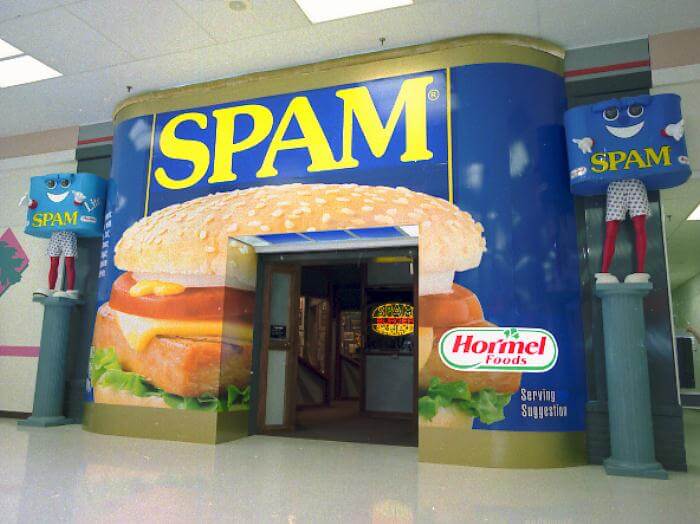 The SPAM® Museum actually found its original roots when the company opened a Hormel Foods First Century Museum in 1991 as a celebration of the company’s 100 year anniversary. The most alluring parts of this history exhibit were those that told the story of the iconic SPAM® brand. The company later rebranded the space to be dedicated to the brand.

A much larger entirely SPAM® brand-focused museum opened in September of 2001. The 16,500-square-foot space included historical displays, a theater, family activities and games, and a gift shop. The lobby of the museum featured a wall made of more than 3,300 SPAM® cans and, for many years, the theater showed a short film, “SPAM® Products: A Love Story.”

It is only fitting that this year, for the company’s 125th anniversary and 25 years after the concept was born, that the museum finds its new home in the heart of the city.

The home of the museum

The Minneapolis Star Tribune quoted the mayor of Austin, Tom Stiehm, giving insight into the home of the museum. “It amazes me how many people have been to the SPAM® Museum. [The museum] puts Austin on the map in a lot of ways. They might not know Austin, but they know the SPAM® brand.”

One of the biggest pushes behind building a new museum and moving it to the middle of downtown was to support local businesses.

Some businesses have even reported an uptick in traffic and sales since the new museum has been open. One shop in particular has even added Sunday hours of operation because their Saturday traffic has increased so much.

SPAM® Museum manager Savile Lord says, “In general, many small towns across the Midwest are seeing a decrease in size and robustness, but by moving the museum downtown we are able to bring a large number of visitors directly into downtown and encourage them to stay. It is fantastic to see the streets come alive as traffic comes in, and to know that that those people are engaging with other businesses is very exciting.”

The museum staff even hands out maps of the area that show local attractions and points of interest, and specifically lists the restaurants that serve items containing the famous product.

In the 12 previous years, the SPAM® Museum saw more than one million visitors. This ranked the establishment as the third most popular free tourist attraction in the state by Explore Minnesota.

In honor of the 125th anniversary of Hormel Foods, the SPAM® Museum is shooting for a goal of 125,000 visitors in its first year. In its first six weeks of having its doors open, the new museum attracted over 17,000 people from around the globe, including the Virgin Islands, Brazil, Germany, Japan, England, Russia, Slovakia, Hawaii, Australia and many, many more.

The SPAM® Museum is so much more than a new downtown destination, it is the full story of one of the world’s most iconic brands and truly a Minnesota must-see. 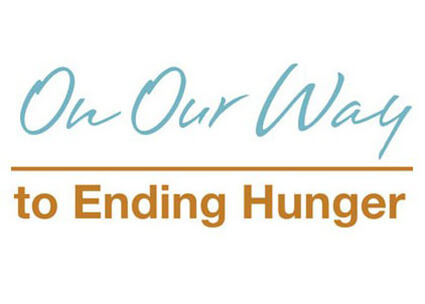 On Our Way to Ending Hunger donations 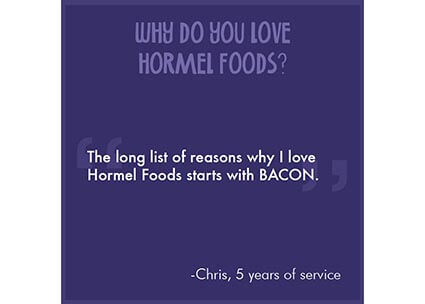