AUSTIN, Minn., (January 27, 2016) — Hormel Foods Corporation (NYSE: HRL) is celebrating its 125th anniversary in 2016. This commemorative event provides an opportunity to reflect upon the company’s rich heritage and celebrate the future direction of the company.

Though much has changed since George A. Hormel first founded Geo. A Hormel & Co. in 1891, the company is still proudly based in Austin, Minn., and the values on which it was founded – integrity, an uninterrupted quest for quality and innovation, a respect for one another and a commitment to community – still define Hormel Foods today.

“We are proud of our legacy and the many people who have helped shape this company today,” said Jeffrey M. Ettinger, chairman of the board and chief executive officer at Hormel Foods. “Throughout our anniversary year, we will be sharing our stories and celebrating with employees, families and communities worldwide.”

In July of 2016, there will be special celebrations in Austin, Minn., where the Hormel Foods World Headquarters is located. A community celebration will take place on July 29 with award-winning entertainment, great food and activities for the whole family.

“I am excited to announce that we have secured The Band Perry for our main stage entertainment,” Ettinger said. “This award-winning band has performed around the world and we are excited to have them with us to celebrate our anniversary.”

Hormel Foods is also marking the anniversary with the grand opening of the SPAM® Museum in downtown Austin. The SPAM® Museum is set to open in the spring of 2016 and visitors from all over the world will be able to celebrate with interactive and informative exhibits about the iconic brand. 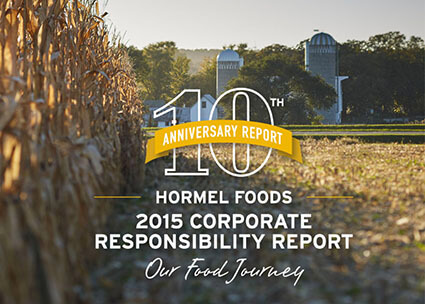